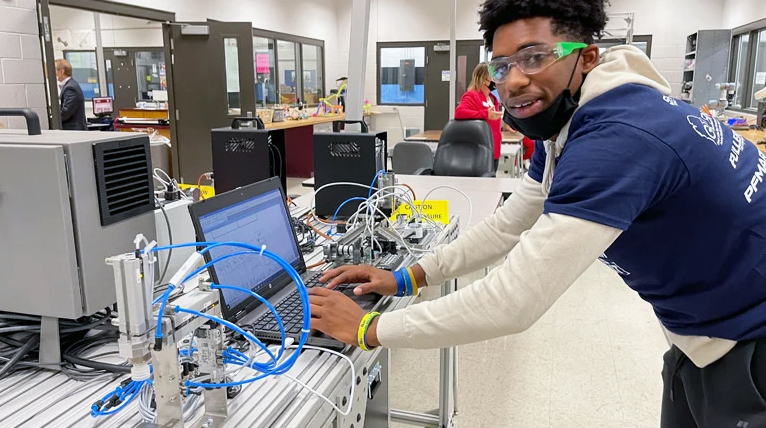 An important SME PRIME initiative celebrated its formal launch on Friday, Oct. 15 at an event at the Saginaw Career Complex in Saginaw, Mich.

Speaking at the event, Michigan State Senator Ken Horn stressed that the COVID-19 pandemic revealed how fragile global supply chains can be. The past year revealed that “manufacturing of every kind is a national security interest to the United States of America.” He also noted that the skilled trades can no longer be thought of as a second-class opportunity for young people starting careers.

“The biggest challenge to manufacturers is talent. It is the primary barrier to our growth,” said Mike Johnston, Vice President of Government Affairs, Michigan Manufacturers Association (MMA), also speaking at the event. The MMA has been a partner in developing Michigan SME PRIME schools. “We need to fundamentally change policy in this state and move away from the long-term policy of four-year degrees. Nothing wrong with four-year degrees. [But we also] need people who can actually make things,” he stated. He went on to note that the recent $6 million education budget appropriation by the State of Michigan announced in July will expand the PRIME initiative to include up to 15 additional schools in Michigan. “Creating a talent pipeline is what manufacturing needs.” The MMA represents traditional and advanced manufacturing enterprises across Michigan.

SME PRIME is building on success. Key metrics reviewed from schools responding to a recent study indicate that the SME PRIME schools initiative has resulted in 89 percent of students directly entering the manufacturing workforce, training in an apprenticeship position, or pursuing post-secondary education in engineering or manufacturing disciplines.

Since 2011, SME PRIME schools have been initiated in 63 communities across 22 states, creating opportunities for thousands of students, with 17 SME PRIME schools located in Michigan. Following up on this established base, in July 2021 the state of Michigan awarded the SME Education Foundation $6 million as part of the approved School Aid Fund Budget.